Washington: A Legacy of Leadership, by Paul Vickery and Stephen Mansfield 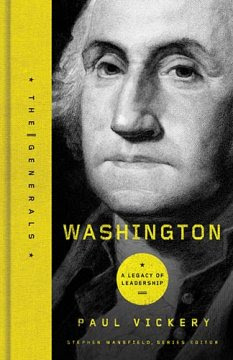 George Washington was a man that exemplified leadership.  He is remembered for being “first in war, first in peace, first in the hearts of his countrymen.”  Furthermore, he was a man of character, perseverance, and faith.  Leaders today would do well to imitate him.

This book was interesting because it begins not with Washington the leader, but with Washington the boy.  As Washington grows in age, so does his wisdom, faith and leadership abilities.
The book is arranged mostly chronologically culminating with his presidency and death.  The focus is not on his actions as President, but more on his experiences leading up to his becoming Commander in Chief of the military and ultimately his being unanimously chosen to serve as the nation’s first President.  Through his successes and failures we see the character of the man being shaped.
I found this to be an interesting, quick read.  I appreciated the many quotes from Washington, taken from written correspondence.  You could really feel a sense of “being there” as the Colonials tramped through the winter with their bare feet.  Especially I liked the role faith played in Washington’s life.  Through the many quotes you can tell that he was a man of deep faith and conviction.  I would recommend this book to anyone interested in leadership or history.
I received this book courtesy of Thomas Nelson Press in exchange for an honest review.
The views expressed are my own and have not been influenced in any way.
Posted by The Pallmanns at 12:31 AM

Hi. thanks for the nice review and noticing the use of quotes. Since I wrote this primarily for a secular audience, I wanted GW to "speak for himself" about his faith. We love Portugal and esp. Cascais!! Stayed at the Hotel do Guincho, had no idea there was a school there, blessings,