Jesus is the Rock 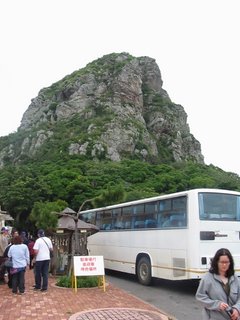 
Actually it was not too bad. Maybe a 20 minute walk to the top.

This was on Ie Jima, an island off of Okinawa. It is a nice, little island of about 5000 people. There are just one or two churches on the whole island, but they don't seem to be very effective. Please pray for Okinawa, especially the outer islands. 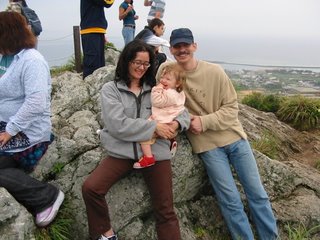 Wanted to pass this on:

This is a cool new video for the Bible College here. 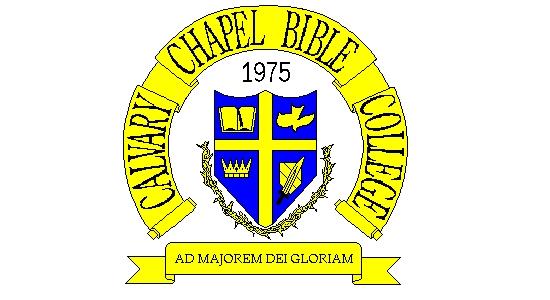 If anyone is interested in possibly coming out here long or short term, please do not hesitate to contact us. There are many opportunities for ministry, to take classes, and just meet some great people, while having a good time.
Posted by The Pallmanns at 7:18 PM No comments: 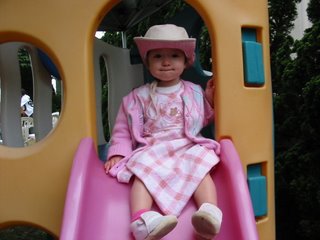 We had a good weekend:
On Good Friday we were at the Koinonia Cafe where there was a viewing of "The Passion". There were over 40 people present many non-Christians. Tim gave a great message afterwards.

These are some pictures from church. After Church, there was a picnic and some games for the kids. Emi had fun at her first "Egg Hunt." 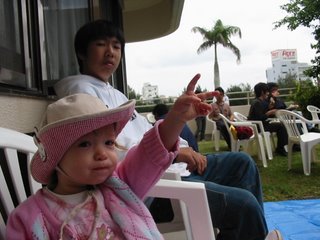 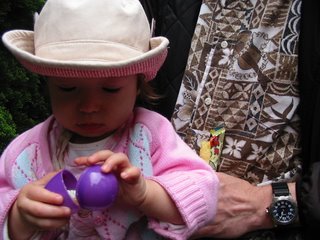 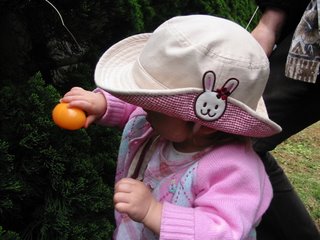 Posted by The Pallmanns at 7:39 AM No comments:

There's a hole in my bread! 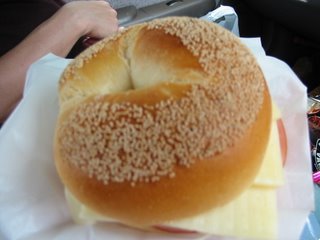 So back home getting a bagel is no big deal. Of course when you are from New York, you cannot help but compare other (less worthy) bagels to the ones they make in NY.

And, no, Lender's frozen bagels are not the same thing.


In Japan, you can get almost anything, but it isn't cheap. There are a few things that are very difficult to get however: 1) Pizza without some bizarre topping like squid or corn, 2) Mexican food, 3) Men's deodorant (besides a spray), and 4) Bagels.

Okinawa, though, is different. Here you can find American style pizza and good Mexican food. Recently, a friend clued us in to a bagel shop. 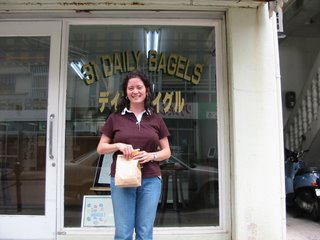 So even though it is named "31 daily bagels", they only have about 5 types.

How were they? Well, they were very good! They claim to be NY style and I have to say that they were: they loaded mine with ham and two cheeses. Debe had a generous helping of cream cheese on hers. 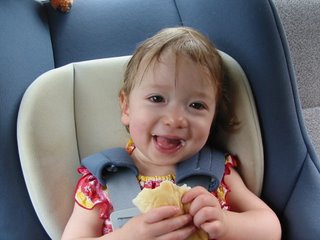 Emi had her version of bagel: soft bread. She enjoyed it just the same.

We are blessed to live in Okinawa!

Who was Chiune Sugihara?

He is Japan's Schindler.
If you have seen the movie, "Schindler's List", you will recall that Oskar Schindler defied the Nazi party and gave many Jewish people visas that saved their life.

Sugihara did the same thing. He worked in the Japanese Counsel in Lithuania. Against the orders of the government, he issued thousands of visas to Jews fleeing Poland. He saved up to 6,000 lives.

When asked why he would do this, his answer was that "these were human beings that needed help. I could disobey the governement, but I could not disobey God."

Sugihara was a Christian who truly lived by his principles.
Posted by The Pallmanns at 10:39 AM No comments: