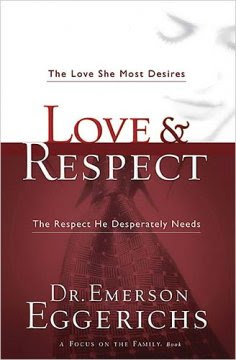 Women have a need to be loved; men have a need to receive respect.  This is the basic message of Love ＆ Respect, by Dr. Emerson Eggerichs.  Drawing upon his almost 30 of pastoring and counseling, as well as the Bible, Eggerichs paints a picture of how many married couples approach their marriage.  When the wife perceives “unloving actions”, she reacts in ways that will be perceived as “disrespectful.” Naturally, when the husband perceives “disrespectful actions”, he in turn reacts in ways that are “unloving.”
Eggerichs calls this the “Crazy Cycle.”  He goes on to explain how we can avoid (or at least limit) the time spent in this cycle and how to move to the “Energizing Cycle” (and eventually to the Reward Cycle.”
Now I get a bit wary of “Self-help” books for Christians.  Too often they are filled with the world’s thinking.  In fact, I probably would not have read this book had I not heard Dr. Eggerichs speak.  Certainly there are many people with marriages that are in need of help, but when we start using the world’s thinking to solve our problems we head down a “slippery slope” that leads away from God.  I can assure you that Eggerichs does not do this; rather his analysis is Biblically based with scripture supporting his points.
I found that this is a good read for those that have struggling marriages, but also for those that have good marriages – any marriage can be made better.
I received this book from Thomas Nelson Press in exchange for an honest, unbiased review.
The opinions expressed are my own and were not influenced in any way.
Posted by The Pallmanns at 9:31 PM