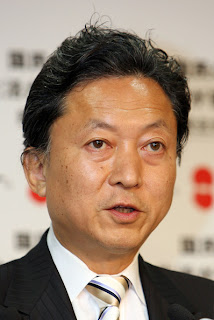 August 30th was Election Day here in Japan. While foreigners are not permitted to vote, we have been interested in this election. They had predicted that the ruling party, the DPJ (the Democratic Party of Japan), would be ousted from power. This is significant because they have held power in Japan for almost 55 uninteruppted years.
Record high unemployment (5.7%) and a stagnant economy made people consider a change.
Well the prediction turned out to be correct, as the LDP (The Liberal Democratic Party) now has about 75% representation. They will undoubtedly select their party's leader Yukio Hatoyama to be the next Prime Minister.
Mr. Hatoyama is reportedly a Christian, so we will be praying that he will be led by God as he takes the reins of Japan.
Posted by The Pallmanns at 9:08 PM

I did not know that he might be a believer. What do you know about his wife? CNN is reporting some interesting things about her and her strange beliefs.

Yeah I recently read that too. Regardless, let's pray for them both!