A Vote for Change? 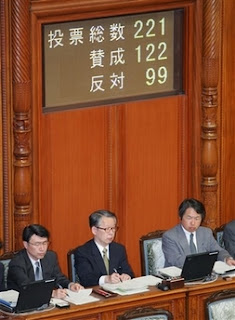 Well the big news today is that they voted to allow amendments to the Constitution. Japan's Constitution, in place since WW2 has never been changed.

Primarily, they want to allow for a Japanese Military, which is currently not allowed. Of course, they get around this by calling it a "Self Defense Force" (SDF), instead of the Military.

I guess they feel it is time to update the Constitution to deal with the threat of North Korea. And many people in the U.S. feel the same way about America's Constitution -- that it is a "Living Document" and needs to be changed and updated from time to time.

Well thank God that we, as Christians, have a document that never changes, never needs to updated or amended. God's Word is...well, God's Word. And His Word doesn't change despite the attempts of man.
Posted by The Pallmanns at 9:35 PM