So in Japan we are a day ahead of the US. Well, half a day really. Well, it depends where you are in the states. Anyway, when the Superbowl was played, it was Sunday in the states and Monday over here.

Being a Monday, Dan usually has to work. But this year it worked out th 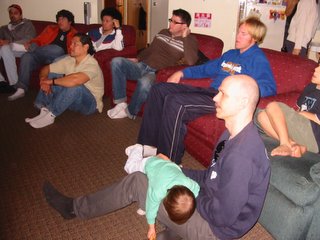 at Sunday was a workday with Monday being the off day. (Sunday was a Music Festival that all the students and teachers had to participate in).

Living in Okinawa, some areas are able to get AFN, the Armed Forces Network. Designed for the military families, it gives them a lot of television programming from the states. While we don't get the channel in Naha City, our friends Larry and Mona do!

Here we all are watching and eating. Oh, by the way the game was live, so it started at 8:30 in the morning. While the game was not one of the greatest played, it was a blessing to be able to watch it and fellowship with some good Christian fellows.
Posted by The Pallmanns at 11:31 PM