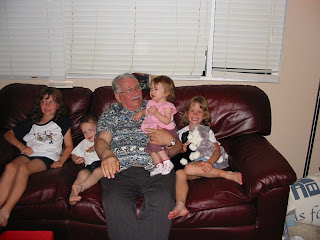 This week my father passed away. The son of German immigrants, growing up in Brooklyn was not easy. He was the "stereotypical" German: hardworking and stubborn, although he never drank beer.
We were not able to make it back to New York for the funeral, but if I were there I would have shared this:
My father was a good man. If I had to describe him using just one word, I think that word would be "Faithful." He was faithful in many ways:
Although I regret that my daughters did not get to know him, they will still "know" him in a sense: he has passed on many positive attributes to his four sons. I know that he was proud of all of us and we will all miss him.
Posted by The Pallmanns at 11:17 AM

What a nice tribute to Dad, Dan! I was sorry I could not be there in person, but having him out at Thanksgiving, was nice! Dave says the viewing was very uplifting and encouraging!

Dan, thank you for sharing. Reading about your father brings me into tears. What a great father you had. I am looking forward to meeting him in heaven one day. Praying for you and your family.